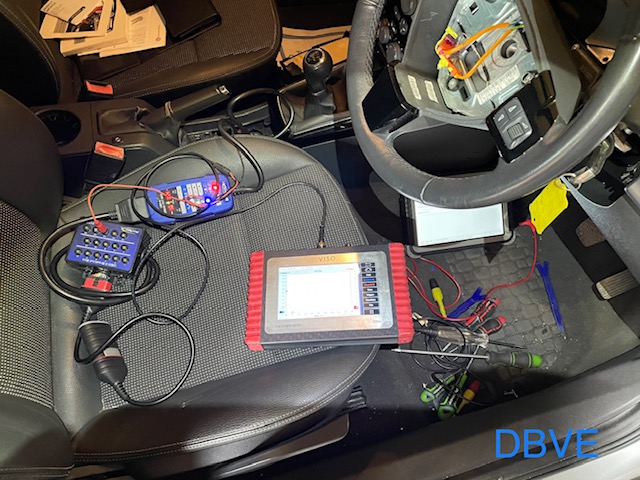 Vauxhall Astra H 2008 no start. Customer was a retired mechanic and had a good understanding of what was needed to start the vehicle. However he come to a blank when he carried out many checks and wanted it correctly diagnosed.
Due to him still having garage equipment he carried out the following before us looking at it. A code scan & sent the ECU away for testing ( come back all ok ).
We visited the vehicle and found we could only communicate with certain modules. The only modules we could communicate with were all on the body can-bus network. At this point we confirmed the vehicle wouldn’t start because no modules were communicating on the Engine Can-Bus line.
We got this vehicle running in just over 1 hour. Due to these vehicles being very Can-Bus based / involved you have to take a logical approach and test at each stage. Otherwise you could easily start chucking parts at something that isn’t broken.
We confirmed the engine Can-Bus line was pulled down with the scope, so we broke the system down into sections making a quicker diagnosis. After our checks we found the ABS system was pulling down the Can-Bus network. Once this was unplugged the engine started as normal. So it only requires a new ABS module.
This is a small list of the parts it COULD have been….
• wiring issue
• CIM unit
• front fuse box
• rear Fuse box
• instrument cluster
• engine ECU
Professional diagnosis in east Lindsey call 07340341790.
admin2022-05-31T14:50:42+00:00

This website uses cookies to improve your experience while you navigate through the website. Out of these cookies, the cookies that are categorized as necessary are stored on your browser as they are essential for the working of basic functionalities of the website. We also use third-party cookies that help us analyze and understand how you use this website. These cookies will be stored in your browser only with your consent. You also have the option to opt-out of these cookies. But opting out of some of these cookies may have an effect on your browsing experience.
Necessary Always Enabled
Necessary cookies are absolutely essential for the website to function properly. This category only includes cookies that ensures basic functionalities and security features of the website. These cookies do not store any personal information.
Non-necessary
Any cookies that may not be particularly necessary for the website to function and is used specifically to collect user personal data via analytics, ads, other embedded contents are termed as non-necessary cookies. It is mandatory to procure user consent prior to running these cookies on your website.
SAVE & ACCEPT